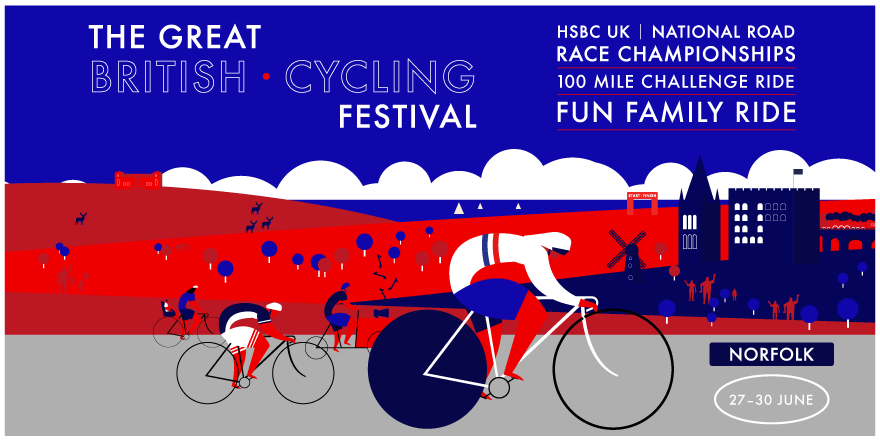 The route for British Cycling’s Road Race Championships is announced

British Cycling has revealed the route that its prestigious Road Race Championships will take. View the men’s and women’s routes here.

The Championships form part of the Great British Cycling Festival, which is going to be an epic weekend-long celebration of cycling which will see families and amateur cyclists getting involved in a series of rides and activities. It also provides a chance to witness the pinnacle of the British domestic road calendar, the Road Race Championships as it starts and finishes in Norwich.

The Festival will see the men’s and women’s time trial champions crowned on Thursday June 27 at royal Sandringham Estate. And after the road races get underway in Norwich on Sunday June 30, amateur cyclists of all abilities will be testing themselves in the shadow of the professionals with a 100-mile sportive that follows the same course the professionals will be taking.

There will be a festival atmosphere in Norwich, with lots of engaging programmes of activity to come and enjoy.

“Sunday’s road races will both start and finish in Norwich city centre, with the men racing over 125.2 miles and the women 83.5. Both routes will head north from the city centre, via Wroxham, Cromer and Wells next the Sea, then through Holkham Hall for the men, taking in some of Norfolk’s most spectacular coastline before riders make their way back towards Norwich through Foulsham.

“We’re delighted to be able to confirm these routes. The list of previous winners of the road race or time trial titles – including the likes of Laura Kenny, Mark Cavendish, Lizzie Deignan and Geraint Thomas – gives some indication of the prestige of these titles, and to see them contested in Norfolk’s truly stunning surroundings will be a wonderful spectacle.

“We have worked closely with Golazo, Norfolk County Council, Norwich City Council and Active Norfolk to ensure that we have routes which provide the very best experience for riders and spectators, and we’re very confident that this year’s HSBC UK | National Road Championships will showcase the county and our sport in a fantastic way.”

On Sunday June 30th, the 100-mile sportive – the British Cycling Challenge 100 – is just one of the ways in which the general public can get involved in the Great British Cycling Festival. There will also be a family Let’s Ride closed road cycling event taking place in Norwich city centre, which will see cyclists of all ages taking to the city streets.

The Great British Cycling Festival is sponsored locally by the University of East Anglia.

For more information on all aspects of the Festival including the route, visit the British Cycling website – https://www.britishcycling.org.uk/nationalroadchampionships